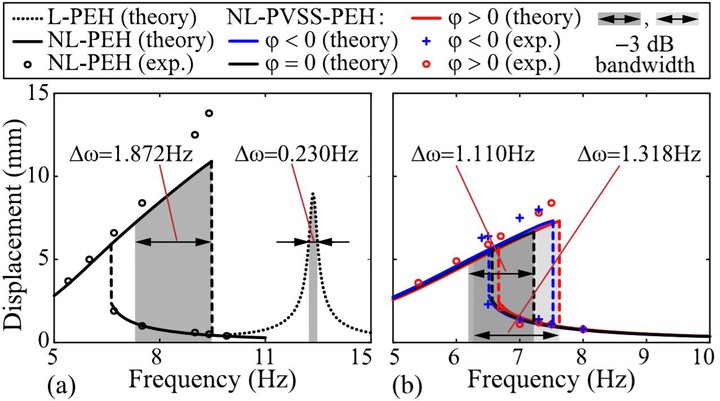 Literature has shown that the bandwidth of a piezoelectric energy harvesting (PEH) system can be effectively broadened by introducingnonlinear mechanical dynamics. However, when connected to a practical PEH interface circuit for ac-to-dc conversion, the bandwidthimprovement will be impaired because of the electrically induced damping effect. On the other hand, there is another bandwidth broadeningsolution, in which the resonant frequency is tunable to some extent by carrying out the phase-variable synchronized switch (PVSS) controlin practical interface circuits. This Letter reports a synergistic design by combining these two mechanisms toward a dual-effect broadbandPEH solution. The theoretical model of this nonlinear and electromechanically coupled system is derived. The experimental result showsthat, by introducing the PVSS control to a PEH system, which is composed of a monostable piezoelectric cantilever beam and a practicalsynchronized switch interface circuit, its bandwidth can be broadened by 18.7%. This dual-effect solution incorporates two bandwidthbroadening mechanisms toward practical broadband PEH systems.