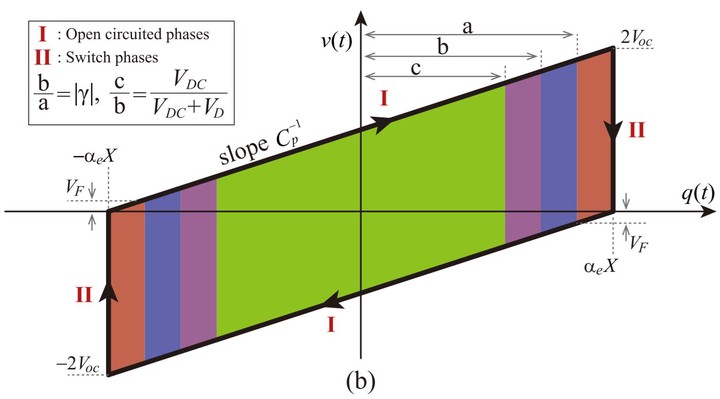 Piezoelectric energy harvesting (PEH) systems convert ambient vibration energy into usefulelectricity. An interface circuit intervenes the electromechanical energy conversion; it has asignificant effect on the electromechanical joint dynamics and harvested power. Among theexisting interface circuits, the synchronized electric charge extraction (SECE) solution wasknown for its unique feature of load independence. However, the actual harvested power wasusually shown to be lower than the previous theoretical predictions. The reason is that the energydissipation in power conditioning, e.g. the diode dissipation in the rectifier and the switchingdissipation in each energy extraction, have not received sufficient consideration. This paperrevisits the joint dynamics and harvested power of PEH systems with a SECE interface circuit byusing the energy flow analysis and impedance modeling. By qualitatively scrutinizing the energycycle of SECE, the electrically induced dynamic characteristics are broken down into threecomponents- the equivalent capacitance, dissipative resistance, and harvesting resistance, whichhave the same effects but different values, like those in other PEH interface circuits. The threecomponents are equivalent to an additional stiffness, a dissipative damper, and a regenerativedamper in the mechanical domain. The theoretical harvested power, which is estimated based onthe impedance modeling, shows good agreement with the experimental results under differentloading conditions and operating frequencies. Owing to its modular way of thinking, theimpedance modeling technique once again shows its effectiveness and efficiency towards theanalyses of joint dynamics and harvested power in PEH systems using different powerconditioning interface circuits.