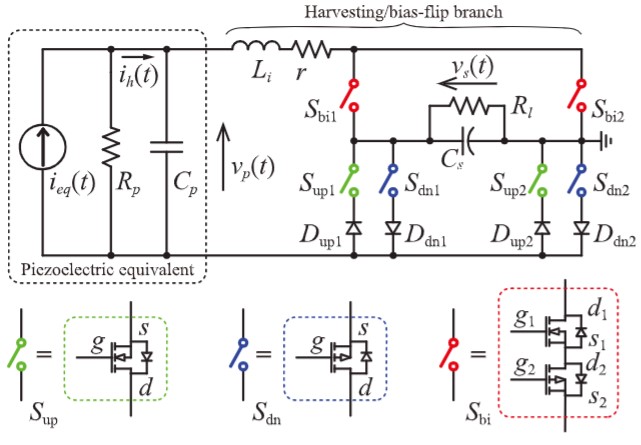 The synchronized multiple bias-flip (SMBF) interface circuits enhance the piezoelectric energy harvesting (PEH) capability by maximizing the extracted energy from the piezoelectric source and simultaneously minimizing the dissipated energy in the power conditioning circuit. They provide the most energy-economic solution for piezoelectric energy harvesting enhancement. However, the growing scale of switches network and the increasing number of bias voltages have added much complexity to the circuit design and control. In this paper, we reduce the number of passive components to the biggest extent by maximizing the usage of a single capacitor, which simultaneously acts as energy storage and provides two non-zero bias voltages. Together with the free zero-volt bias, triple bias-flip actions (S3BF) are realized in the new design. Compared with other single-capacitor designs, it makes the best energy harvesting capability so far. Moreover, the proposed series S3BF circuit can automatically shift among single, double, and triple bias-flip operations under heavy, medium, and light load conditions, respectively, which is unprecedented in the previous designs. Theoretical and experimental results show that the harvested power can always follow the maximum power envelope of the single, double, or triple bias-flip operations.